FINALLY HE IS OUT OF VOCAL CARCINOMA HE IS SURVIVING WITH A GOOD HEALTH WORKING IN HIS FARM HOUSE.GOD SAVE HIM BY AYURVEDA.

I am Gurmeet Singh, and my father name is Baldev Singh age 65 years from village Mashani dist Hanumangarh. My father has Najla disease from the last 20 years, and without this, he has not any significant illness in his whole life. From the previous ten years, he has diabetes, and its treatment is going on. My father never touched any tobacco-like cigarette, bear. Yet his voice was dead.

So we treated him from local doctors, but the result was not good. Then on 15.12.2013, we went to doctor Bhawani Singh (ENT) from Hanumangarh, and he told us that there is a lump in your father's head. After this, on dated 06.01.2014 we went to doctor Rakesh Rawat from Bikaner, and he also said about the bow, so we took a sample of lump and sent this for checking.

When reports came then, the doctor said that my father was on 2nd stage of cancer gave advised for go to a big hospital. I brought father back home because I saw and heard that patients dead who take radiotherapy and chemotherapy. We gave only medicine of Najla to my father.

After some time my brother-in-law told me about "Vishla Agrotech (P) Ltd. at Bikaner so on dated we went there with my and all reports. The doctor saw all the Reports and checked the pulse and assurance us about the father's health. He got some blood test and found out that Eosinophil and ESR increased. And in the second test found out that uric acid, cholesterol, liver and sugar were high and R.A factor was little positive.

The doctor has taken advice from another allopath doctor, and he suggested to take "Zyloric" tab for uric acid and "Ondoc 8mg" for cancer. That day my father's weight was 72.1 kg. The doctor gave us "Tum Can Capsules of Dr Thanki's and suggested that take it ten pcs. Daily in three parts for one month, And gave us Dr Thanki's Liver care powder for taking one spoon in the morning and evening with water.

As per rules, we have to secure the lever. Heart and kidney during cancer treatments, so the doctor gave us "Solobon-140 tab and syrup Amlywre for taking both like one tab in morning and evening and two spoons two times in a day. In the position of appetite take four spoons of sorbiline syrup by dissolving with a half glass of water after lunch and in the place of diarrhoea take one tab of tab Saptran in morning and evening. Having constipation Duphalac -20ml advised taking at bedtime. On dated 31.03.2014, we tested blood in Hanumangarh and found out there is no problem in the blood.

During these treatments, my father seemed to reduce appetite and vomiting in the first 2-3 days of the month. He began to fit by taken medicine as per direct by a doctor. Now he has no problems, and there are no symptoms of the disease. 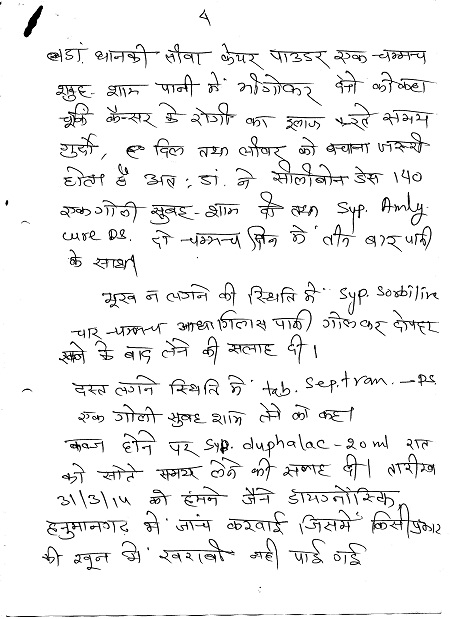